SPORTS EVENTS ARE BACK!

We are delighted to be able to inform you that face to face competitions will be returning for this academic year! We have already signed up for over 30 TSSP events where, if selected, your child will be able to compete and showcase their skills against other children in schools across the borough. Event winners from here will go on to compete for Thurrock against other districts in Essex. Not only will we be competing in TSSP events, we will be seeing the return of our Catalyst trust school competitions, where again, if selected, your child will be able to compete for the Catalyst Cup against the other trust schools. We look forward to reporting our successes at these competitions soon.

In the latest sporting event our team of year 6 Quad kids athletes headed over to Dilkes Academy for a socially distanced and covid friendly Quad kids event against the other schools in the trust. The team performed amazingly well beating their own personal bests to help take home the silver medal. In an event that was competitive, all schools sat and cheered on their opponents to help them get through each gruelling activity, an amazing show of sportsmanship from all involved. A huge well done to Logan who won an individual bronze medal and Kubekwa who won silver for her individual efforts. 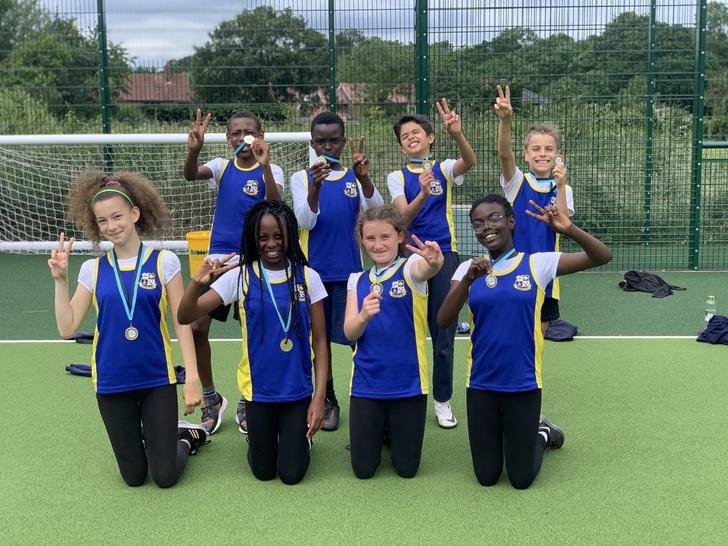 Sport in the summer term at Quarry Hill has started with a very successful Race for life event which every school member participated in, helping to raise over £500! Although the weather was against us, that did not stop us. A huge congratulations to all of the children who behaved impeccably throughout the day. 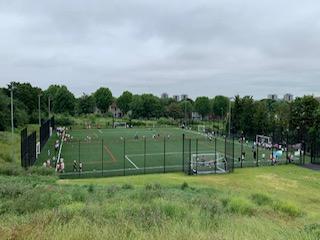 It has been a very different start to this academic year with sport. due to the current circumstances, we have not been able to participate in as many TSSP events as we usually would, although we have still been entering some virtual events. Just before half term all children were tested and scored as part of the sportshall athletics competition and some of our gymnasts completed their routines ready to be sent off for judging.  We are still waiting for the official results to be announced although we know how amazing all of the children's scores and routines were. Hopefully they should be announced in the next few days.

We are also pleased to announce that we are now able to use our state of the art all weather MUGA pitch.  It really is an impressive surface and we know how much all of the children are enjoying participating in their PE lessons on there on a daily basis. 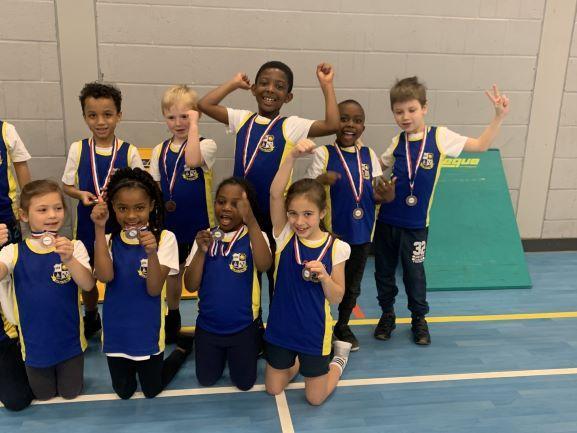 Minutes after the game had begun, the heavy torrential rain began to pour down and the blistering wind swept across the pitch sending cold vibrations through the grass. We continued to play in the cold but the game was made difficult from the whipping wind which made us shiver. Many successful passes were helping us create chances to score but their goalkeeper was having a fantastic game, until... Finally! We managed to score giving us a 1-0 lead. Happiness and pride burst through us all.

Only moments later a girl from Kenningtons ran forward with the ball and unleashed an unstoppable shot past me into the net, 1-1, I was now more determined than ever to stop any more shots beating me.

At the start of the second half the wind increased and it was beginning to sting.  It did not take us long to finally find our groove again and create another chance to score, we did it!  2-1!  Just like that the game was over.  We have completed our league games only losing once.

Leaving the game we were all overjoyed and sang the whole way back to school.

We also found out that due to our win we have qualified for the play-off finals! Here we come!

Once the game had begun, sounds of thumping footsteps echoed throughout the school, sweat and heavy breathing flooded the game as we took advice and guidance from our teachers. Within the game, numerous sounds of encouragement rang through our ears. In the breaks at the end of the quarters, more advice, sips of soothing water. Several shots were taken in the quarter unsuccessfully. This was where our super shooting started, An uproar of happiness and elation spread as quick as wild fires. Infectious smiles beamed across the netball court. Another goal! Before anybody could even realise, we were on an unstoppable streak of four. Would we score more? Will we win? Not getting our hopes up we continued to play. Full of determination and courage we continued to play, not able to add any more goals we were only leading by two goals with the score at 4-2, They scored again! 4-3! Anxiety and even more bravery entered our veins. The ball was suspended in the air for what felt like an eternity, looking like it was going to land inside the hoop, Crash! the ball hit the outer rim and went off court! We had survived! With the game finishing 4-3 we applauded both teams for an excellent game and returned to our "home sweet home" school.

Once we had finished our warm up, a short high pitched whistle sounded, the battle commenced. As the wind rushed past, the sound of stomps and scuttling footsteps approached Deneholm's goal, Whoosh! The sound of tranquil breeze bolted past the keeper and the ball flew high into the goal, elation exploded as realisation hit each of us that we had scored. Minutes later, the ball hurried past me into the goal leveling the game 1-1. Courage surged through me and I told myself " I am determined to win and as a team we will succeed together".

As minutes passed by we managed to regain the lead, before I had even processed such immense information, another goal went scurrying past the Deneholm keeper giving us a 3-1 lead. It was now time for the second half, for the first few minutes it felt as though time stood still, then, another goal! I silently celebrated not wanting to get my hopes up too high, a high pitched whistle sounded to end the game, elation filled our bodies with happiness. We look forward to many more games to come. 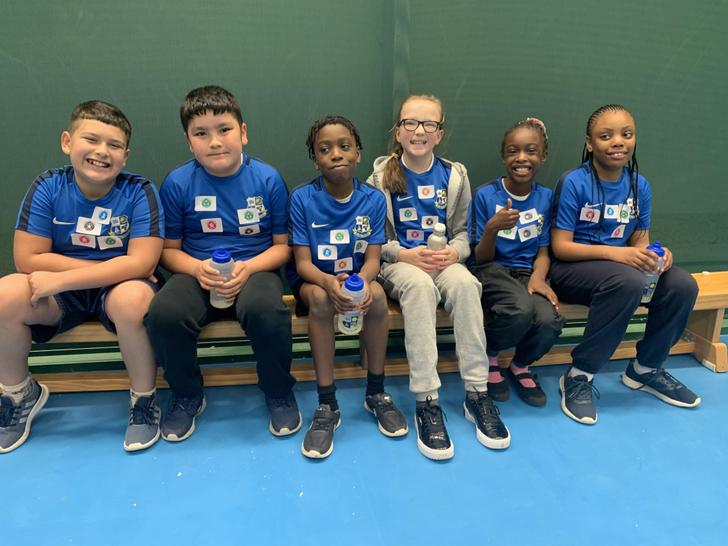 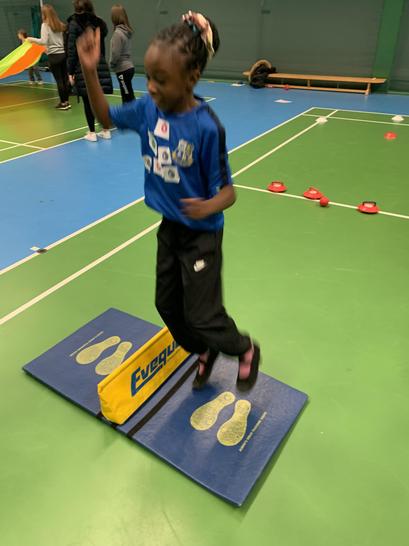 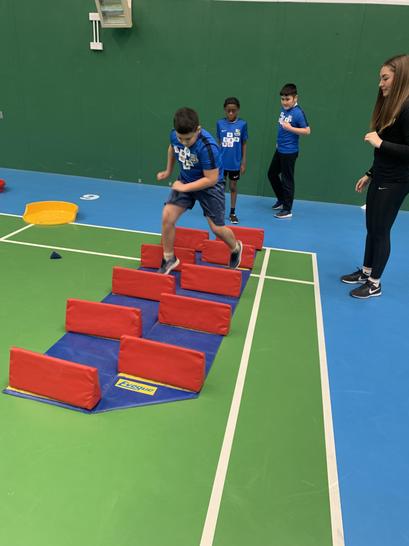 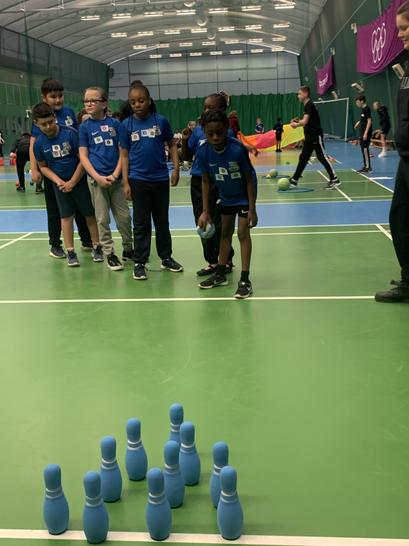 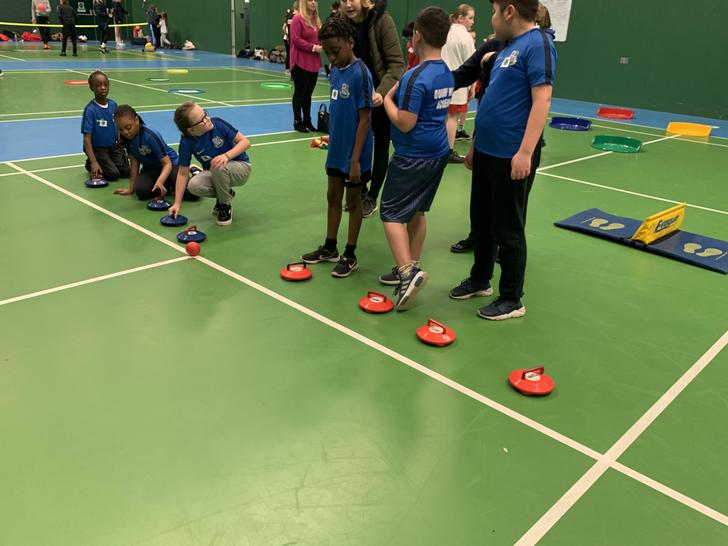 written by the blogging team

On Friday 10th January, a group of KS2 children headed over to William Edwards School to take part in a multi sports skills event. Filled with enthusiasm, the group of children made their way to the event in the school's minibus. When they arrived, they made their way across to the immensely impressive badminton sports hall and although the hall was freezing cold, nothing stopped the excitement the children were experiencing.

Working as a team we had to successfully win the 6 different reward stickers on offer to complete the skills test. Along with 9 other schools we took turns to complete one of the 13 stations that had been set out. These events included bowling, sports hall athletics, volleyball, curling and many others.

Two hours later, we had managed to collect all 6 stickers and completed the test. An immense feeling of pride filled our bodies and beaming smiles filled our faces for the entire journey back to school and continued for the rest of the day.

Minutes before we entered the bus, an ecstatic feeling, which had earlier consumed us, erupted like a silent volcano. Once we had arrived at their fantastic school, we got off of the school's mini bus and walked to the office to inform them that we had arrived for the netball fixtures. Finally approaching the environment we had to play in, rain began hammering down leaving many of us shivering like cold bunnies in the snow. Now starting the game, a loud whistle was blown for the first centre pass.

From my point of view, it looked like both games were going splendidly well. Also, I must say that I am impressed about how far we have come this year; this journey has been very remarkable. Both teams A and B have evident skills from aim to footwork.

Although we lost, this was another one of many learning opportunities. This is where we could perfect our footwork and positioning in a match situation. Having experienced many games last year, I think this game was the one I enjoyed the most. Being a scorer for one quarter, it gave me the opportunity to view both games that were taking place. An absolute highlight of the match was when one of our players scored a goal. Once the ball whooshed - like a rocket - through the net, we celebrated. We were still losing but we weren't about to give up! Unfortunately we ran out of time before we could claw back the score, narrowly losing the game. A mixture of sadness and happiness combined all the players as we were happy with how we played, although sad we had lost. With some encouraging words from our teachers, we are now determined to continue to improve in our next game.

It all started when we entered the school bus and Paul the school site manager drove us there. Approaching the massive building, we entered the school's office and tried our luck to get in but to our surprise we had gone the wrong way. When we finally arrived, we warmed up so we were ready to play the game. Adrenaline shot through our spine and corrupted our minds with excited thoughts. After a few minutes of the game starting, a wonderful pass to Tanisha was successful and she used this lucky advantage to score a wonderful goal, where the ball whistled into the net. Elation tingled through my fingers getting me ready for any action that would occur.

Although Little Thurrock had lots of chances to score, I was a very talented goal keeper due to all of the skills my PE teachers are teaching me.

We are now in the second half and a new moment began. Would we be able to score any more goals?

Just as I thought the scoring was over, it had just started! I did not want the feeling of happiness to disappear. A tremendous pass from one of our amazing girls on the team passed the ball to Souzan - what a chance to score! In it went, we hit the jackpot!

Minutes later, the whistle blew and the whole team was called to form a line. 'Three cheers for Little Thurrock' 'Hip Hooray!' went Tanisha's booming voice, nearly forgetting the words.  We collapsed into heaps of laughter and shook hands with the other team.

Celebrating our victory, Paul drove the bus back to our beloved school.